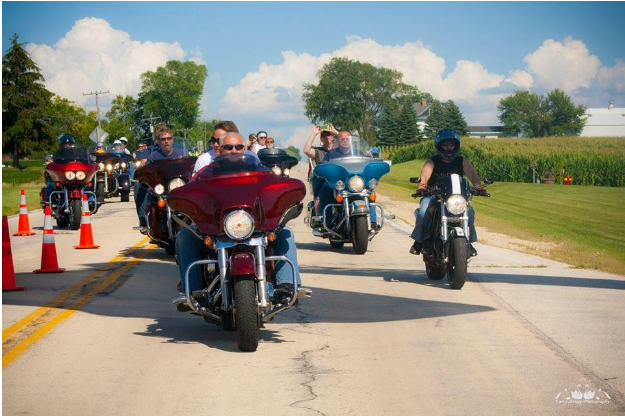 This year’s ride is scheduled for Saturday, July 22nd, leaving the park around 11:15 AM and ending southeast towards Dodge County. We have confirmed that we will be stopping at Endeavor-Moundville Fire Station for lunch. The committee is looking for a short stop between Wisconsin Rapids and Endeavor and another after leaving Endeavor before we end the ride.

“It is our hope that those participating in the ride will arrive early enough to take a walk through this very meaningful tribute honoring those hometown heroes that have made the Ultimate Sacrifice along with visiting the Visitors Center,” said Ron Naab.

The WSFM Park is located on the west side of the Wisconsin River on WI-73/54, north of Port Edwards.

Registration forms should be out shortly, according to Chairman Ron Naab of the American Tribute Ride. He may be contacted at rjnaab@frontier.com.

The 2017 American Tribute Ride will be the 15th annual event. “We would never be able to accomplish this amazing feat if it were not for some very dedicated volunteers along with the many fire departments we have stopped at during the years,” Naab continued There are some very special departments that have stepped up to host more than once, Grand River Fire Department [Markesan], Neshkoro Fire Department, Kiel Fire Department, Almond Fire Department and Lions Club, and Veterans Retirement Center at King.